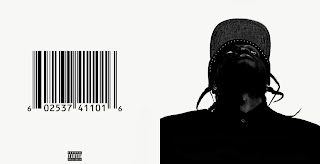 Ayo whattup… You now in the presence of the grand imperial Cocaine Biceps Deluxe. Welcome to the Cappucino Lounge… Feel free to caress the luxurious velvets n furs on the walls n shit. Make yaself comfortable. Im yall host Big Ghost aka Thor Molecules the great aka the illustrious Phantom Raviolis aka Shampoo Bracelets the panty melter aka the divine Galaxy Knuckles aka ya boy Broccoli Bundles or the magnificent Volcano Hands… otherwise known as the mighty Hands of Zeus hisself. Im glad yall could make it today nahmean.

So as promised…we gon talk bout the latest release from the one n only Pusha Ton today. I dont kno bout yalls but for me personally this was one of the most anticipated joints of the year. Matter fact if you a thoro dude in the slightest way this was the MOST anticipated release of the year jus off the strength of the quality of work that the younger brother of Gene “(No) Malice” Thornton Jr. been puttin in for years now. Thats not sayin Kanye n Hov n Drake aint had three of the most anticipated albums of this year already… Not to mention the return of Dre’s prized pony Marshall “Berzerk” Mathers still on the way n shit. But I personally really dont think any of those albums lived up to the expectations that was set for em before they dropped namsayin. Yeezus pushed the boundaries but I think deep down almost anybody who heard that shit woulda preferred 9 more “Bound 2” type joints on that shit. But hey…yall free to lie to yalselves namsayin. MCHG was coo… It was a dope album… but Jay dont wanna take more than 5 minutes to put together a verse these days…n the cracks n dents in his armor startin to really show nahmean…especially when he gettin outshined by the Orlando Bloom of rap on the NWTS closer “Pound Cake” (cake…cake cake cake cake). Speakin of that shit…lotta yall white iphone owners was disappointed wit the lack of tearjerkers on the latest Drake joint too. Personally I thought it was a step in the right direction for ey’body favorite Jewgro to get in touch wit his masculine side n flex his ability to rap without breakin into a melancholic ballad halfway thru each track tho. Eminem decided he was gon make it impossible to not disappoint his fans n add some unnecessary pressure to his own self by namin his latest “comeback” The Marshall Mathers LP 2… I aint gon bother finishin that last thought cuz you already kno what the fuck Im sayin yo.

So wit Weezy jus stackin more n more bricks on his lego tower of post-No Ceilings failures n no new albums from Nas or Kendrick on the horizon that left it to up n comin niggas like Chance The Rapper n underground heroes like Killer Mike & El-P aka Run The Jewels to save the year from bein bout some bullshit. We did get a quick EP n some features from the homie Action Bronson. We also got Schoolboy Q set to drop…hopefully… amongst some other shit. But other than that…the year was kinda light. It was also some shit that was dope from my mans Gangsta Gibbs n Boldy James n some other folks too… Far as Im concerned tho…album of the year still up for grabs bruh. Me? I had put my bread on Pusha-T a while back. Was I wise to bet it all on dude? Lets find out…

RT @NextMovementPod New episode has landed! We talked to @EsteeNack about his contributions to @BigGhostLtd ‘s Carpe Noctem, living in the present, using rap as a means to a greater end, raiding his uncle’s closet as a kid, and Mobb Deep’s classic Hell on Earth. Listen now! podcasts.apple.com/us/podcast…

@Cleanstreetz Nah Im good on that.. But you aint wrong