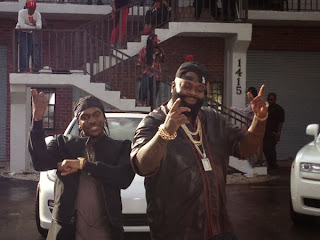 4. Hold On (feat. Rick Ross & Kanye West) – Not gon lie… the Kanye 808s & Heartbreaks autotune crooning be kinda gettin on my nerves yo. This the first joint so far that got any commercial appeal at all. So this the first real compromise on the album namsayin. Like you aint hear no shit like this on the Clipse “Hell Hath No Fury” joint…which is a classic n a damn near flawless album in my book. But that shit also aint even sell 250k to this day. That shit went double asphalt b. But lets face it yo…the vast majority of muthafuckas buyin albums is niggas wit white iphones n females who hate rap. Plain n simple. Now as a rap artist…you can talk all this keep it thoro shit n be forced to live strictly off tour n merchandise bread or you can get summa this cake from sellin records too. How you do it is up to you tho. But from what I understand bout major labels…they dont fuck wit you if you dont sell no records son. They jus leave ya shit on the shelf til you beg em to release you from the contract n thats usually the best case scenario most the time. Now if you doin ya little mixtapes n free shit or you be droppin ya joints on a independent label you dont necessarily gotta play the game like that namsayin. But son aint on no independent label.. this is Def Jam which is basically the NBA for rappers yo. Now even tho this got some glossy coatings on it niggas still kept it all the way raw (not you Kanye).

“Godbody n mind…food for the soul When you feedin on hate, you empty my nigga…it shows”

I mean these aint jus ya usual Rozay drug kingpin fantasy bars…son really tryin to kick some knowledge forreal. Shit bout to get ugly at the next Freemasons meeting b. Now me personally…would I prefer that these muthafuckas had came wit some MILLIONS MILLIONS IN THE CEILING CHOPPAS CHOPPAS IN THE CLOSET type shit again? Most definitely. But I aint gon front. Ion dig all the Yeezy weepin in the rain type autocroonin but I cant front on the track itself nahmean. Niggas bodied this shit n dropped jewelz on the track at the same time nahmean. Overall I kinda fucks wit it.