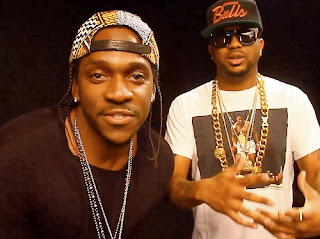 6. 40 Acres (feat. The-Dream) – When this shit started n The-Dream began to gently serenade the delicate synthesizers that kicked this shit off on some probable bitchmade shit…I admit I had my finger hoverin over the skip button ready to keep it movin to the next track namsayin. But seein as I take this shit I do kinda seriously.. I resisted the temptation n ended up lettin that shit marinate for a quick minute n next thing you kno…Im gettin pulled into this shit like when the tractor beams on the Death Star was pullin the Millenium Falcon towards it in the first Star Wars joint. This might be the realest shit on the album so far b. This shit introspective than a muthafucka… My nigga givin you a glimpse inside his soul on this shit namsayin. Thats my word. I love this shit yo.

7. No Regrets (feat. Young Jeezy & Kevin Cossom) – This shit got that same Cruel Summer/GOOD Music feel that the Hold On track had. So its no coincidence they was both produced by Yeezys snow nigga Hudson Mohawke. Kanye aint had nothin to do wit this one tho. Not gon lie…it aint my favorite song on the album. This was a definite compromise to add some commercial appeal to the LP tho. This coulda been a song by like 100 other rappers out right now. It aint wack but its definitely on some filler shit. Snowman kinda went in tho. He simplified the shit outta his flow but this might be my favorite Jeezy verse in a minute. It probably gon get some burn in the club but at the end of the day its a million of these celebration of success type songs out chea… It aint no automatic skip for next time but this aint the type of song thats gon be remembered forever or nothin neither. Ion really fucks wit it tho.